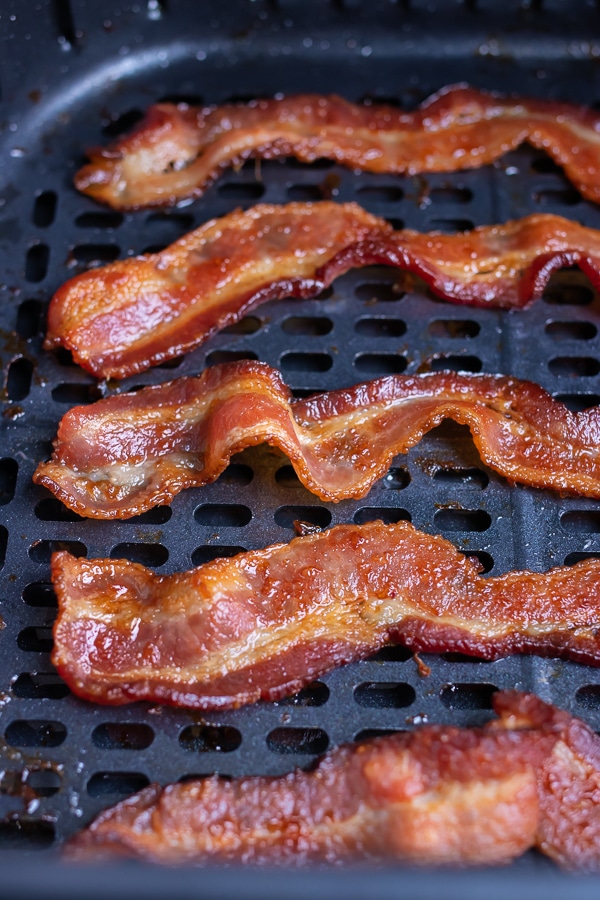 By learning how to cook this Air Fryer Bacon recipe, you can simplify your breakfast meal prep while still getting perfectly crispy bacon in just 10 minutes! In the air fryer, strips of bacon are roasted from all sides while the fat drips away, leaving them fully cooked and quickly ready to eat. Once you’ve given this no-smoke method a shot, you’ll never want to try another kind again!

For many years, there has been a rumor floating around which I didn’t want to be true. The buzz in the food community has been that air fryer bacon is better than ANY other method of cooking it – in a skillet on the stovetop, on the grill, or even oven-baked bacon!

Surely, I thought, there’s no way this could be possible. These people obviously haven’t had my father-in-love’s Saturday morning bacon, lovingly cooked in a cast-iron skillet and tended to for close to 30 minutes!

Yet after the man himself reported the cold, hard truth that air-fried bacon WAS, indeed, the best, I knew I simply had to give it a try!

With one batch of Whole Foods thick-cut bacon, fully cooked, crispy, and ready to eat with practically no time and no hassle, I knew I was sold. The intense, open-air heat of convection baking makes the perfect environment for bacon to crisp evenly on all sides, while also shedding excess fat along the way.

Much like the oven, the air fryer is pretty forgiving when it comes to cooking just about anything in it.  But there are a few general rules of thumb you’ll want to follow when selecting your bacon and knowing how long to cook it.

The leanness of the bacon strips will also play a small role in how long it needs to cook.  Leaner strips will cook up more quickly since there is less fat to render off, while fattier slices will take a little longer to cook.

How to Make Air Fryer Bacon

Despite the simplicity of the preparation method, there are still certain steps which must be followed carefully for the sake of quality and safety. These are the steps to follow to make bacon in the air fryer:

Preheat your air fryer to 350°F. Some recipes call for cooking it at 325°F while others call for 400°F. Cooking bacon at 350°F is low enough that it gives the bacon time to release all of its excess fat, but fast enough that it can be ready in just 10 minutes.

This lower temperature is also good for helping to keep your air fryer from generating smoke with the bacon drippings, as the smoke point of bacon fat generally lands around 400°F. However, in the case that it still does, adding a small bit of water – which risks making the bacon soggy – or placing a few slices of bread beneath the cooking basket to soak up the grease may also work to prevent smoking.

Carefully arrange the strips of bacon on the metal rack in a single layer. Try to leave a little bit of space in between the strips, and avoid overlapping them, as any covered parts will remain soggy instead of crisping with the rest.

If the bacon is too long to fit, or if wavy pieces are desired, pieces may be carefully creased or cut in half.

Keeping the type of bacon you’ve purchased in mind, set the timer on the air fryer and cook the strips for 9-10 minutes, adding or subtracting 1-2 minutes based on leanness and thickness.

The safest practice is to err on the side of 7-8 minutes, check the bacon, and then return it to the air fryer to finish cooking, if still underdone. If desired, you can flip the bacon strips at this stage in order to ensure even crisping, although this isn’t usually needed.

When the desired level of crispness has been reached, carefully remove the bacon strips from the air fryer with a pair of long tongs, to avoid burning yourself.

While most of the excess fat will have drained off into the pan during the cooking process, a bit of extra surface fat will still remain. To soak it up, either arrange the strips in a single layer on a plate lined with a paper towel, or dab away the excess with a clean paper towel.

Is it healthier to cook bacon in the air fryer?

Since food is suspended in the air fryer basket, most of the excess fat from the bacon will be rendered off during cooking. This makes air-fried bacon significantly healthier than bacon cooked in the oven or on the stovetop, because it isn’t cooking in its own grease.

What are the downsides of frying bacon in an air fryer?

While air frying is an excellent and relatively healthy way to cook bacon, depending on the size of your air fryer, you may be quite limited in the amount you can cook at one time. Overcrowding the bacon even a small amount can cause it to cook unevenly and turn out soggy rather than crisp.

Do I need to put oil in the air fryer when cooking bacon?

Due to the amount of grease that the bacon will generate on its own as soon as it begins cooking, there’s no need to add any additional oil to the air fryer while cooking bacon.

Do I need to flip my bacon when air frying?

If the strips have been arranged in a single layer, there’s no need to flip the bacon in the middle of cooking. The convection oven-like setup of the air fryer will ensure even crisping throughout.

If you have a little bit of extra bacon leftover, there are quite a few delicious recipes with which you can use it up: 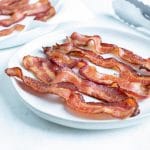 By learning how to cook this Air Fryer Bacon recipe, you can simplify your breakfast meal prep while still getting perfectly crispy bacon in just 10 minutes! In the air fryer, strips of bacon are roasted from all sides while the fat drips away, leaving them fully cooked and quickly ready to eat. 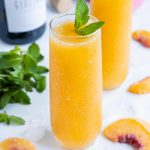 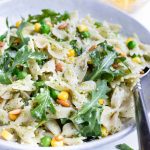 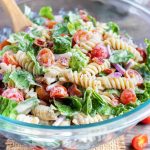 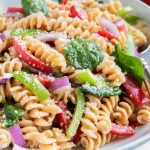 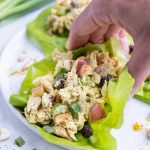 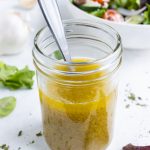