My RecipeTinSearch Recipes
Home » Recipes » How to Make Pumpkin Puree

Making Pumpkin Puree from Scratch is an easy way to have velvety smooth, creamy, and delicious pumpkin to use in your favorite Fall and Thanksgiving recipes.  You’ll first prepare the fresh pumpkin by removing the seeds, roast it in the oven, and then blend it until it forms a puree.  Use it up in your favorite pie, muffins, and bread recipes or freeze the leftovers for later! 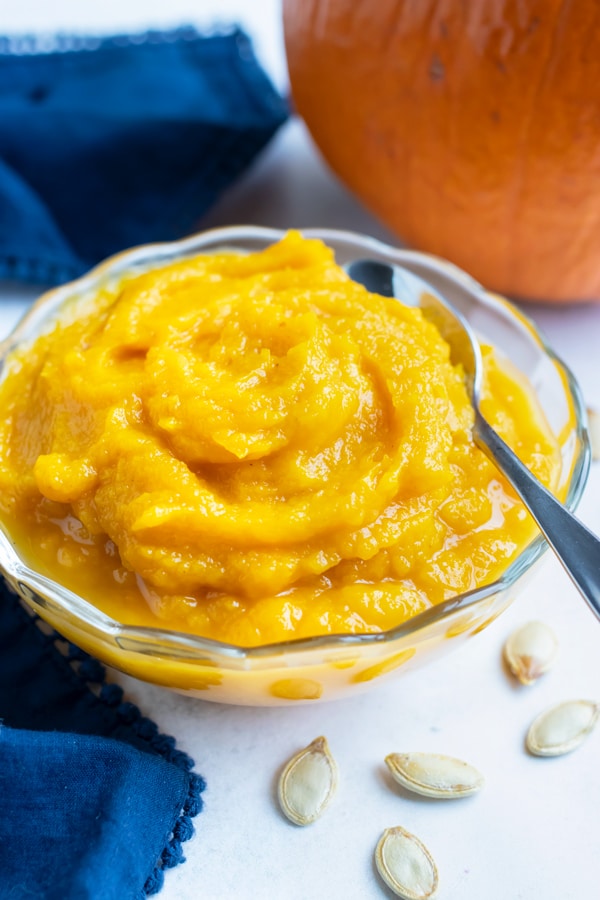 The leaves have begun to change colors and Fall is in the air.  So of course, a few cans of pumpkin puree would be on my grocery list.

I approached the aisle with almost kid-like giddiness, bubbling over with excitement just thinking of the delightful pumpkin recipes I would make that night.

And then, much to my dismay, there was not a SINGLE can of pumpkin puree left.

It’s the middle of September, we’ve had our first cool front, and the store is out of pumpkin puree?!

And then it clicked – oh yes!  Canned puree isn’t the only option.  Making homemade pumpkin puree is actually super easy and incredibly delicious!

So if you find yourself in this pickle (say, maybe the day before Thanksgiving?!) then learning how to make homemade pumpkin puree just might be the lifesaving kitchen hack you need. 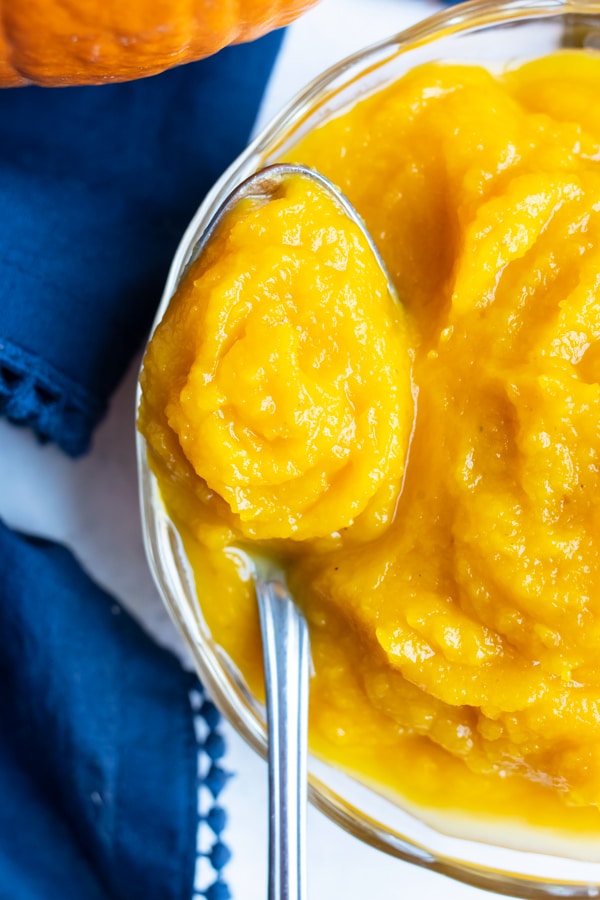 After you make your first batch of pumpkin puree from scratch you’ll notice a few subtle differences between it and the canned kind (like Libby’s brand.)

First, homemade puree is much lighter in color than canned.  This difference in color is due to different varieties of pumpkin being used.

Canned pumpkin puree will also have a very different texture than fresh.  Homemade puree will be softer and velvety smooth compared to its canned counterpart.

Lastly, the taste of the two different purees can vary drastically.

Some canned types actually use a combination of various winter squash and are not made entirely of pumpkin.  Since the winter squash, like butternut squash, are slightly sweeter than pumpkin, canned pumpkin puree tends to have a bit more sugar than fresh.

However, this is not always the case since some canned varieties use pumpkin as the only ingredients.

If you have the extra time and the pumpkin – homemade pumpkin puree is the most fresh, flavorful, and creamiest type to use in recipes. 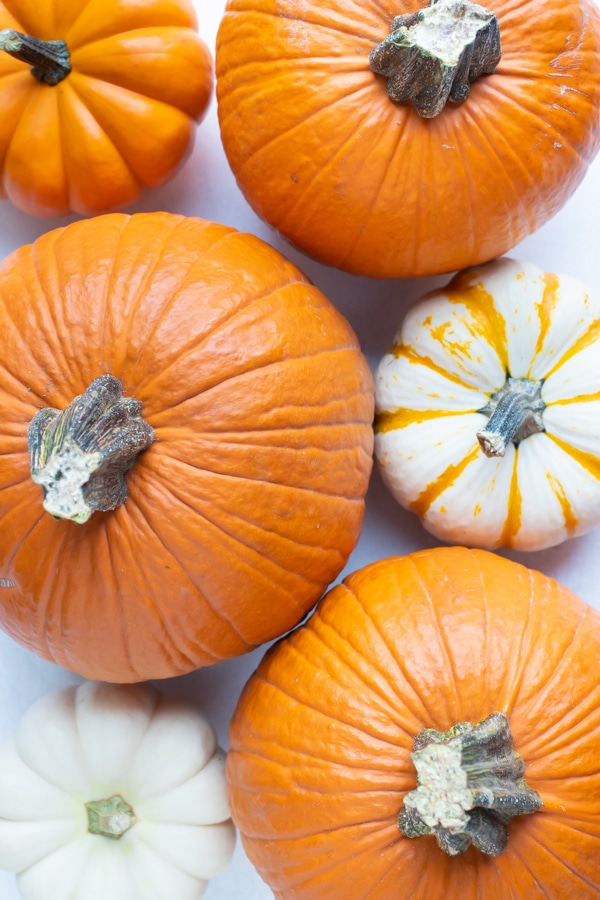 There are a myriad of pumpkin varieties to choose from at your grocery store.

But a word of caution – the most flavorful (and edible!) pumpkin will not be sitting outside of the store on the curbside display.

Nope, the pumpkin you want for this puree will be in the produce section and is most often located with the other winter squash. (Butternut, acorn, and spaghetti squash.)

You will want to look for what is called a Pie Pumpkin.

They are typically somewhere between 2-4 pounds and make enough puree to use in a pumpkin pie recipe.

While you can use only a pumpkin to make puree, I find it comes out even better with the addition of 2 other simple ingredients: 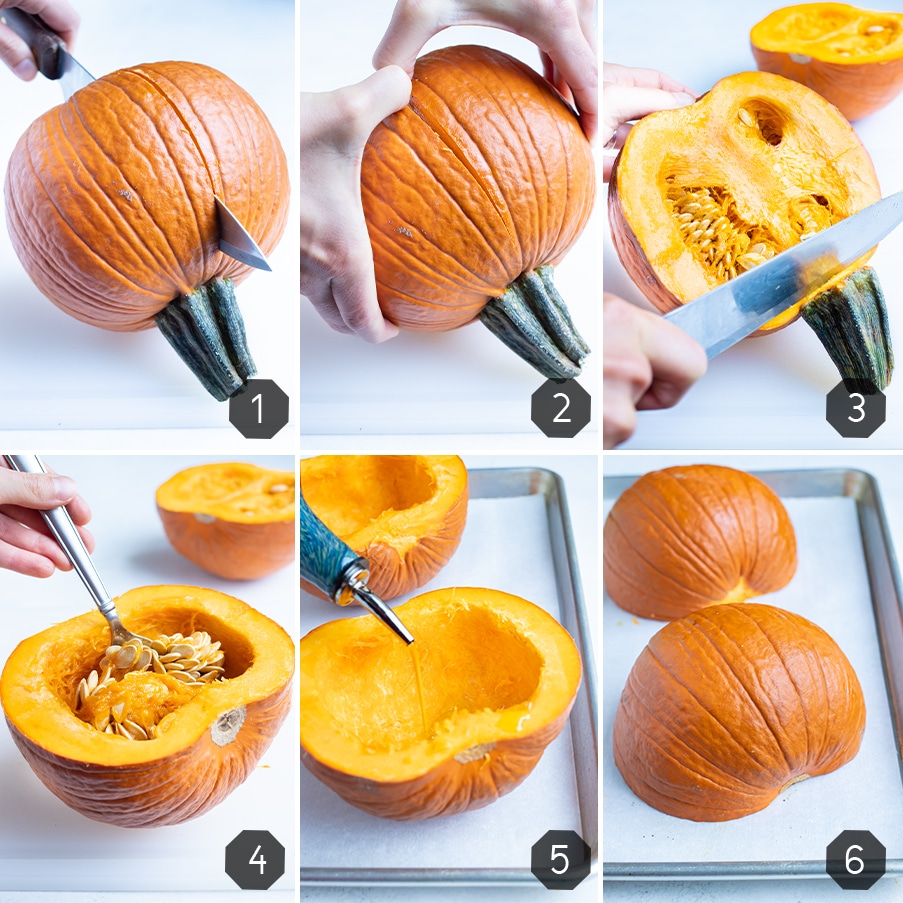 It’s rather simple to make homemade pumpkin puree from scratch.  In fact, if you have ever baked spaghetti squash or roasted butternut squash for soup then you already know the basic process. 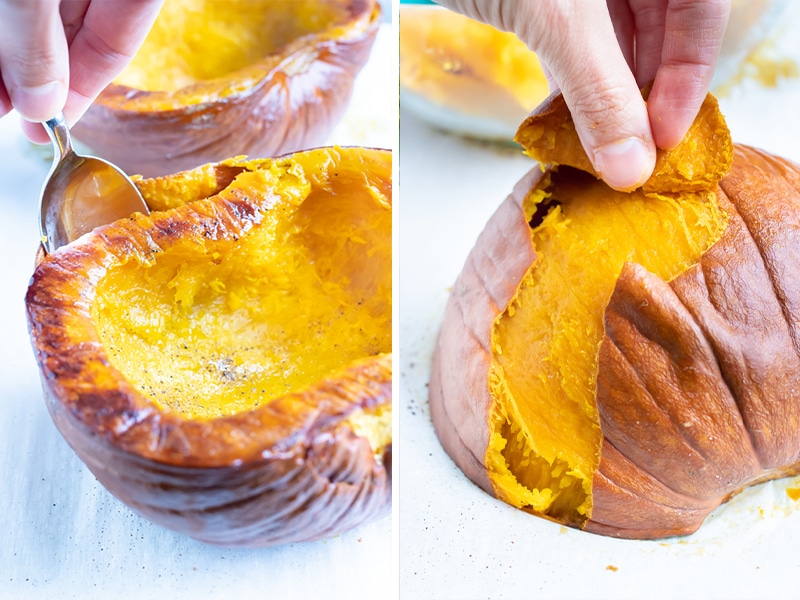 Once the pumpkin is completely cooked, it’s extremely easy to peel the skin and remove the flesh.

There are two ways to peel pumpkin skin:

Method 2: Use a large spoon and scoop out all of the pumpkin flesh.  Scrape the skin to remove as much pumpkin as you can. 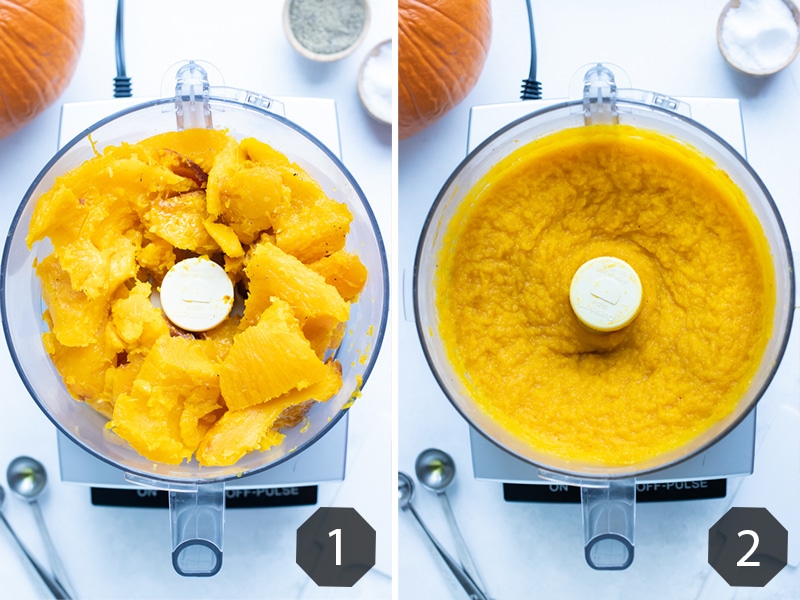 How to Make Pumpkin Puree

You’re almost done!  The last step in making pumpkin puree is to actually PUREE it until it is smooth and creamy.

There are a few different appliances you can use to do this: 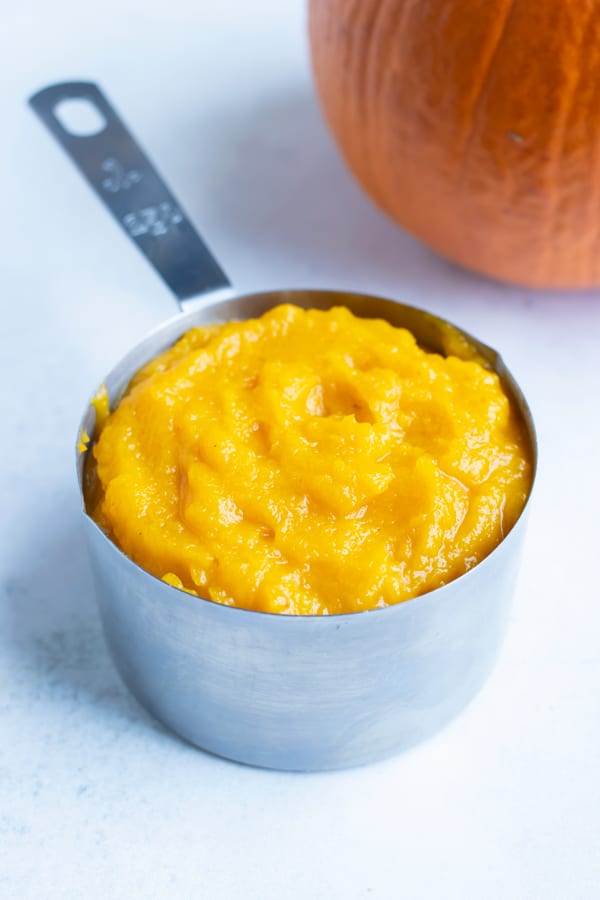 For each pound of raw pumpkin you will end up with roughly 1 cup of homemade pumpkin puree.

As an example, a 3 pound pumpkin will give you 3 cups of cooked pumpkin puree.

You can either choose to store leftover puree in the refrigerator for up to 3-5 days or freeze some for later.

To freeze pumpkin puree, measure it into ½ cup or 1 cup increments and freeze in freezer-safe containers.

It’s best to freeze it in smaller quantities so you can easily pull out exactly how much you want later! 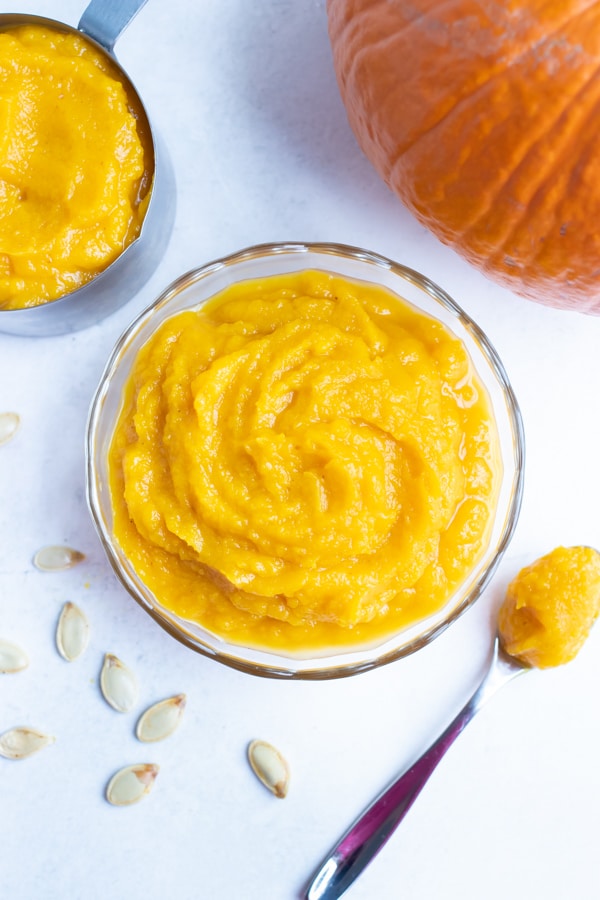 Now you’ve got all of this delicious pumpkin puree, what should you do with it?

The real question is, what CAN’T you do with it.  There are so many yummy and healthy ways to use pumpkin puree.

Here are a few of the best recipes to try: 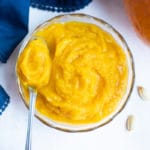 How to Make Pumpkin Puree

Fresh, homemade Pumpkin Purée is not only easy-to-make, but tastes even better than canned! Use right away, or freeze for later to add to recipes like muffins, pies, or even dog treats! 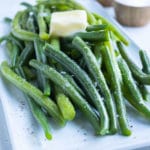 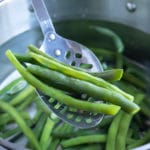 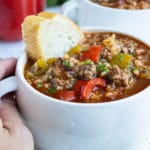 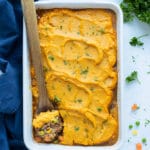 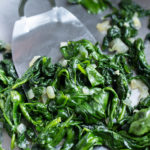