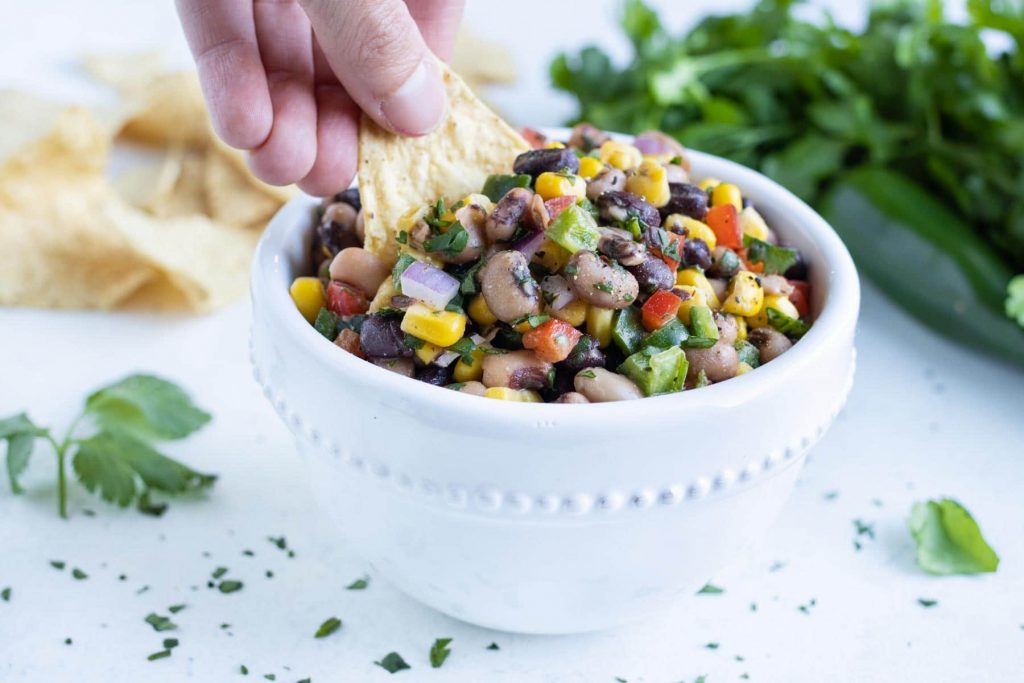 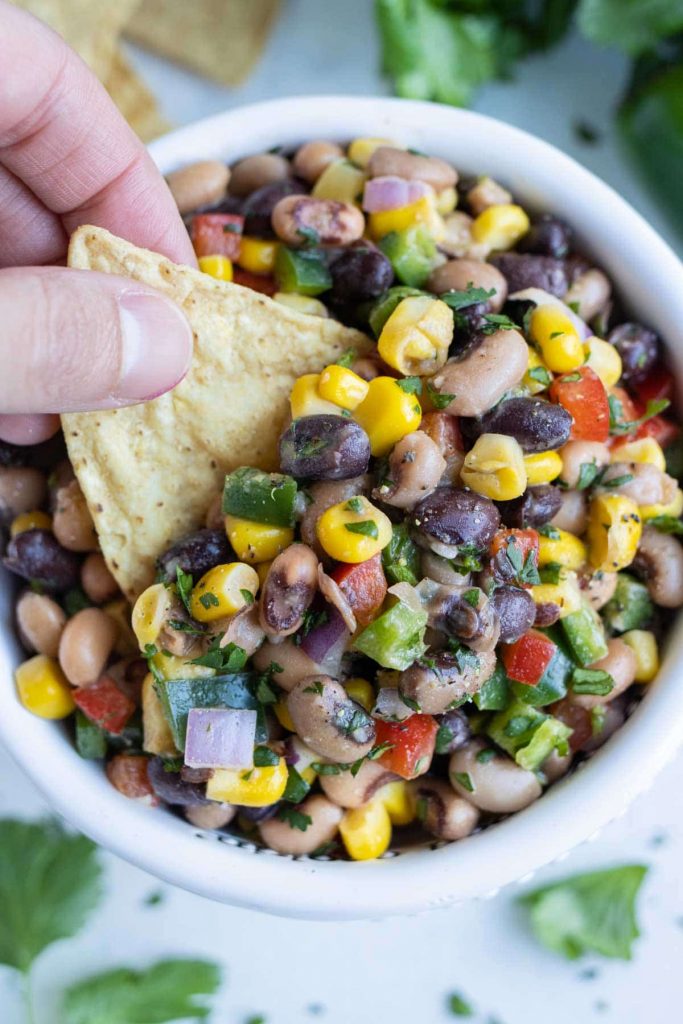 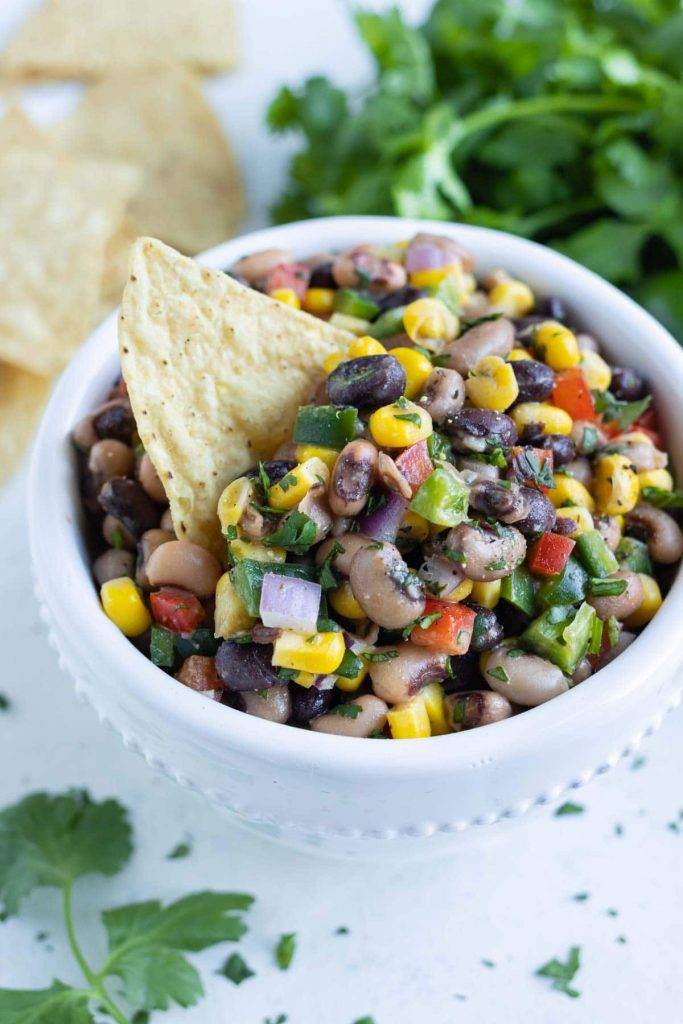 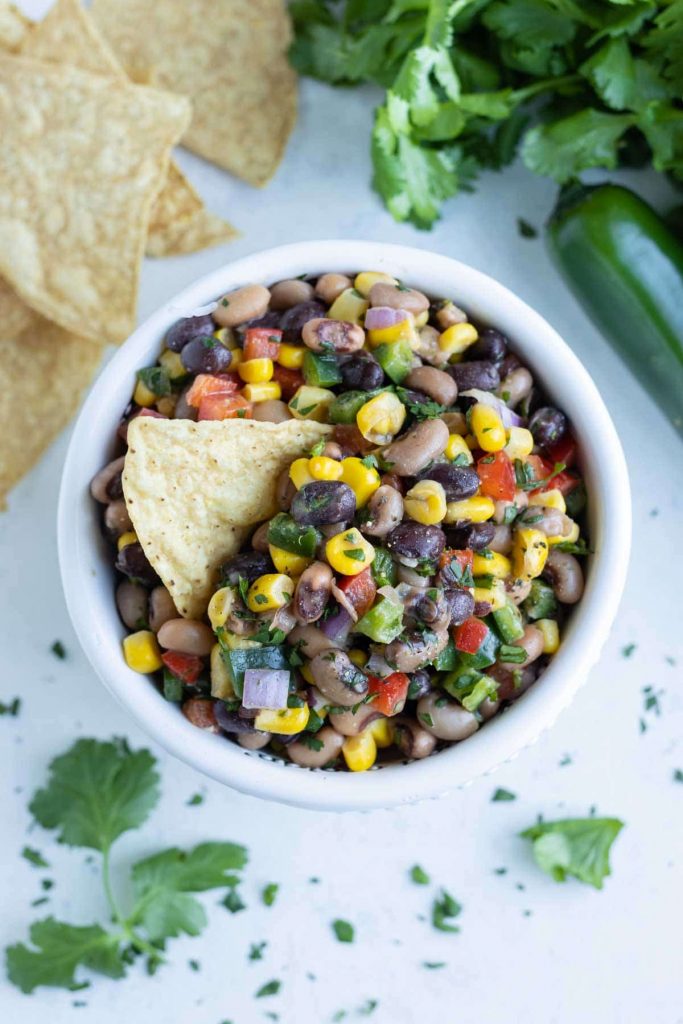 Texas Caviar, also known as Cowboy Caviar, is a delicious and super simple recipe that is perfect for New Year’s Eve or Cinco de Mayo. It is so quick and easy to combine black-eyed peas, black beans, bell peppers, and cilantro with a zesty and flavorful lime vinaigrette. This Southern recipe goes great with chips or you can serve it as a healthy side dish.

Some may call it Cowboy Caviar, but those of us here in the Lone Star State know it’s true origin… thus, proudly sticking with the name of Texas Caviar!

Although the name is a bit tongue-in-cheek, I will say that I would take a bowl full of Texas Caviar ANY day over the traditional stuff.

Served as a dip with tortilla chips, or eaten as a side salad for New Year’s Eve to bring in good luck…

Any way you serve it, this light and refreshing dish is loaded with flavor, so quick and easy to make, and is sure to become a new menu favorite for your holiday or football parties!

What is Texas Caviar?

Texas Caviar, often called Cowboy Caviar, is a simple dip recipe that is delicious with chips or even piled on top of a salad.

While you could include a variety of ingredients, it traditionally has black-eyed peas, black beans, and corn, along with fresh additions like onion, jalapeños, and cilantro. Everything is pulled together with a zesty lime vinaigrette.

Helen Corbit first created and served this black-eyed pea and black bean salad tossed in a tangy vinaigrette for a New Year’s Eve celebration at the Houston Country Club.

It then made its way to the Driskill Hotel in Austin, TX (my hometown now for 8 years!) where it finally earned its’ title.

The simple ingredients you need to make this Texas Caviar recipe include:

The basic steps for making Texas caviar are simple to follow:

Rinse and Drain the Beans

Place the black eyed peas and black beans in a colander to drain the excess liquid. Rinse with running water until the liquid runs clear.

Stir until everything is combined.

Put all of the vinaigrette ingredients into a high speed blender. Blend or shake until it is emulsified. Depending on your blender this will take from about 10-20 seconds.

If you don’t have a high speed blender, a food processor or a mason jar with a lid can be used instead.

Drizzle the vinaigrette over the veggies and beans and toss everything until all of the ingredients are coated.

Let the salad rest in the refrigerator for at least 30 minutes or up to overnight. This allows the flavors to meld together and tastes incredible!

Mix in the chopped cilantro and toss to combine just before serving so that it does not get soggy.

Pair this dish with tortilla chips to make it a dip for an appetizer.

You can also present it as a side dish or salad along with an entree.

Unfortunately, the beans, corn, and peppers all contain too many carbohydrates to be considered keto.

Yes, this recipe is best enjoyed chilled, but can also be enjoyed warm, if you’d prefer.

Dips are the best snacks for a crowd since they’re so easy to prepare in advance. Mix up a variety of flavors to serve at your next get-together.

This Hot Spinach Artichoke Dip is a classic, and of course you can’t go wrong with Classic Hummus and Homemade Guacamole.

And if you’re a fan of seafood, you have to try this Smoked Salmon Dip or Shrimp Ceviche. 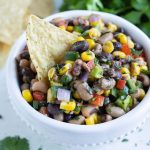 Texas Caviar, also known as Cowboy Caviar, is a delicious and super simple recipe that is perfect for New Year's Eve or Cinco de Mayo. It is so quick and easy to combine black-eyed peas, black beans, bell peppers, and cilantro with a zesty and flavorful lime vinaigrette. 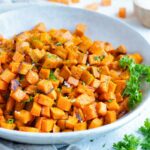 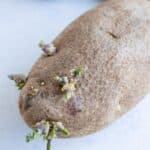 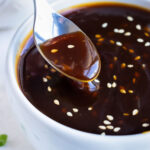 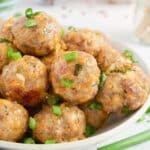 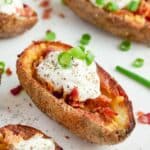 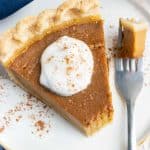