Quickly make a big batch of this Cinnamon Sugar Candied Pecans Recipe to have on hand for the holiday season. Raw nuts are covered in egg whites, tossed in a spiced sweet coating, and baked in the oven until toasty. Snack on these easy roasted, serve at a party, top desserts, or give as a Christmas food gift!

The Christmas season is in full swing.

Our tree is up, the halls are decked, and holiday baking is happening!

With the hustle and bustle of parties, gift-giving, and get-togethers, it’s great to have an easy candied nut recipe on hand.

But becuase they are naturally gluten-free, vegetarian, and dairy-free they also make the absolute BEST food gift to wrap up for a DIY Christmas present for almost anyone!

In fact, give the gift of variety and also include some of these Savory Spiced Pecans!

The simple ingredients you need to make this candied pecans recipe include:

The basic steps for making candied pecans are simple to follow. Please see the recipe card below for more detailed ingredient amounts.

Coat in the Egg White

Whisk the egg whites in a large bowl with an electric mixer for 1-2 minutes, or until it forms a foamy texture and peaks form.

Toss the pecans in the foamy egg whites and stir until they are all completely covered.

Combine the sugar, cinnamon, and salt in a medium-sized bowl. You want to make sure all of the sugars and spices are well incorporated before tossing with the sticky nuts.

Add the cinnamon sugar mixture to the bowl full of nuts and toss until they are completely coated.

Line a large baking sheet with parchment paper. Spread the pecans evenly onto the sheet in a single layer.

If you do not have parchment paper you can simply coat a light-colored baking sheet with non-stick cooking spray. Avoid using foil, as the nuts will likely stick.

Bake at 300°F for 25 to 30 minutes, flipping halfway through to ensure they cook evenly.

Allow the nuts to cool in a single layer so they do not stick together. The best way to store these is in an airtight container at room temperature.

Candied pecans will last for up to 1-2 weeks at room temperature.

You can choose to refrigerate them to extend the shelf life to 3-4 weeks. However, the taste and texture will be slightly affected if refrigerated.

These cinnamon spiced pecans are hands down one of my FAVORITE food gifts to give.

Not only are they naturally dairy-free and vegetarian, but they are completely gluten-free, too. So almost everyone can enjoy them!

To make these into a DIY food gift:

Not all recipes are gluten-free since they may have flour as an ingredient. However, the recipe you will find below is completely gluten-free and can be served to anyone with Celiac’s disease.

Why are my candied pecans soft?

If your pecans aren’t quite crunchy enough you may have baked them for too short of a time. The sugars need to be roasted long enough to harden up.

Are glazed pecans the same as candied pecans?

The two are similar yet different. Candied pecans are generally made with egg whites and a dry sugary coating. Glazed pecans are coated in a stickier mix of brown sugar, corn syrup, and butter.

Recipes to Use Candied Nuts

Other than snacking, use these homemade roasted pecans to add flavor and texture to these recipes: 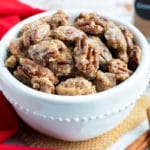 Quickly make a big batch of this Cinnamon Sugar Candied Pecans Recipe to have on hand for the holiday season. Nosh on these easy roasted nuts for a snack, serve at a party, top desserts, or give as a Christmas food gift! 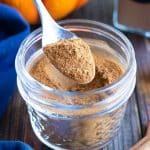 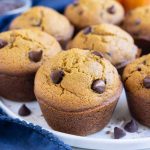 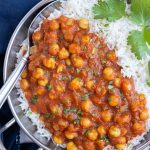 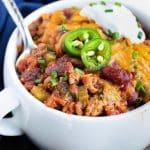